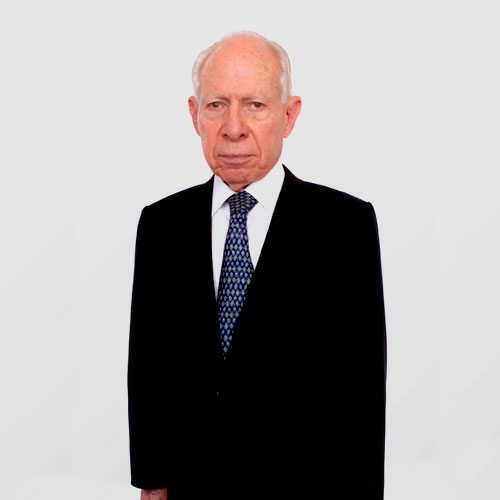 Throughout his career, Guillermo has developed highly relevant projects and is well recognized in engineering and infrastructure circles. Between 1963 and 1975 he worked for Diarc where he became CEO. He was part of the teams that designed and executed structures such as the Olympic Gym and Swimming Pool, the Palacio de los Deportes, Plaza Satélite and Technology Museum. Simultaneously he was Coordinator for the Deep Sewage System project in Mexico City where he conducted design as well as supervision of the work. In 1978 he joined the Public Sector where he was head of Hydraulic Works in Mexico City. During his tenure there he oversaw such works as the Hydraulc Plan and the Water and Sewage Master Plans. In 1982 he was named Secretary General of Infrastructure and Services. In 1986 he became Deputy Head of Construction and Housing Renovation where he developed the reconstruction plans in the aftermath of the 1985 Mexico City earthquake which was responsible for some 50,000 new and renovated living spaces

In 1988 he became CEO of Comisión Federal de Electricidad, Luz y Fuerza del Centro and the Institute for Electrical Research. During his tenure, the electrical system saw a dramatic expansion in generating capacity of around 36%, from 22,600 MW to 30,950 MW with he construction of several stations including Petacalco, Tuxpan, Carbón II, Topolobampo, Aguamilpa, Zimapán, and the second stage of the Laguna Verde nuclear power plant, among others. He was also instrumental in the creation of the Pidiregas, the financing mechanism for public works. In 1994 he was named head of CONAGUA. Since 2001 he has been CEO of Empresa de Estudios Económicos y de Ingeniería, S. A. de C. V.

Throughout his career, Guillermo has received several distinctions including Académico de Número from the Mexican Ingineering Accademy (1973), recognition for the works of the Sewage System in Mexico City (1975), recipient of the Lazaro Cárdenas award from the IPN (1997) and distinguished member emeritus of the College of Civil Engineers (1997) and the Jose María Luis Mora award (2000) from the State of Mexico