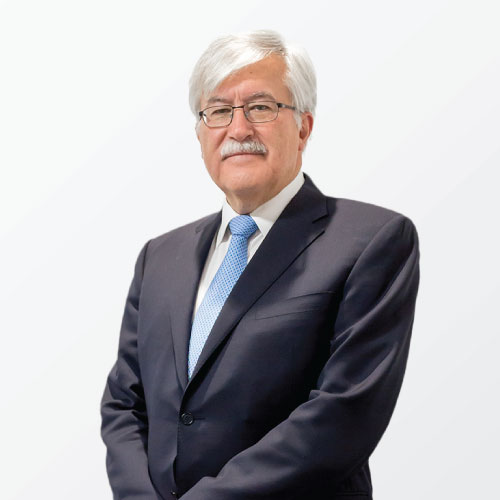 Is a partner at Ainda where he serves as Executive President. He is part of the Investment Committee

He has collaborated with the National Institute for Nuclear Energy, the Engineering Institute at UNAM, the Directorship of Investment Analysis at the Secretaría de Asentamientos Humanos y Obras Públicas and as an advisor to the Office of the President with a study concerning freight transportation in Mexico.

He developed an important part of his career at Secretaría de Comunicaciones y Transportes (SCT) where he held various positions: Chief of Advisors to the Undersecretary, Director of Technical Services, Chief of the Toll Highway Unit, Director of Highway Development and eventually Undersecretary for Infrastructure between 2006 and 2011. While at SCT, he led and participated in several studies to guide national policy. He was key in the creation of the Mexican Transportation Institute and the formation of institutional capabilities to oversee highways under federal concession. He led the team that designed and executed the restructuring of 23 highway concessions. He coordinated the design of the new concessions scheme for toll highways and the scheme to include private investments in the development of Mexico’s highway system

During his career, Oscar has been the face of SCT in international forums related to highways such as OECD, the World Road Association and binational forums between Mexico and the US. He has taught at the School of Engineering at UNAM and other institutions and as presented various studies in transportation related topics and civil engineering. He is a member of the Mexican Academy of Engineers and he is an independent consultant at Grupo Colinas de Buen S.A. and served as President of the World Road Association between 2013 – 2016,  for which he was the first Mexican delegate, President of its Technical Board for Technology Exchange (2000 – 2003), member of the Executive Committee (2004 – 2007), President of the Commission for Technology Exchange as well as Vice-President (2009 – 2011)

Among his distinctions Oscar is a National Research System Level 1, Member of the Advisory Committee for the Pan-American Highway Institute, Founder and Co-President of the Joint US – Mexico Working Committee on border transport, Mexico Representative in the Research Program on Highways for the OECD, Honorary partner at the Mexican Association of Engineering for Land Roads, recipient of the International Merit Medal by the Spanish Highway Association and President of the Board of Directors of Carreteras de Iberia e Iberoamérica